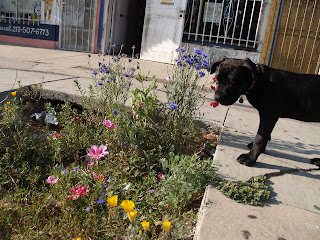 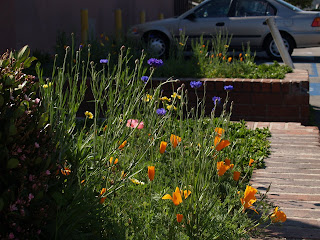 I've not made regular trips to look after the poppies this year. I wanted to see how the poppies would do on their own. Could they hold their own against the weeds? Might anyone else in the neighborhood intervene on their behalf?

Poppy season on York began earlier than last year. Generally speaking, it went from January to April. The most floriferous sites this year included the empty lot on Nolden, and the flower boxes at Childs' and the Church, where the orange of the poppies perfectly echoed the color of the boxes of oranges set out daily in front of the corner grocery store.

In just a couple spots the show this year was greater than last year. But lack of weeding made a big difference almost everywhere. Weed competition reduced the vigor and visibility of the blooms.

Other than a couple strays, poppy season on York is over, former spots of brilliant orange superseded by a monotone shag of dried grasses. Several former poppy sites have been concreted over or razed for other purposes. The fresh bare dirt just screams for replanting.

In South Pasadena, there were quite a few poppies in March and April. For a brief week or so there was a pretty good show on two South Pasadena traffic islands. Poppies appeared out of a crack in the asphalt on a major intersection. The other traffic island had no blooms last year. But miraculously, there appeared an even sprinkling of tiny tiny orange poppies on the island this second year, even amongst dense growth of grasses and erodium.

Chemical spraying reduced what had been a dramatic show of orange in front of South Pasadena Nature Park last year to only a very light show this year.

Ironically, chemical spraying often does nothing to decrease the number of weeds, because the people who spray typically are not paying attention to the lifecycle of plants. Since they often spray after the weeds have already dispersed their seeds, there will be just as many new weeds next year.

A couple people, not from the immediate neighborhood, offered to help water the poppies. This made me think of how in our culture we are taught from very early on to associate the image of the watering can with the tending of plants and the idea of caring for living things.

Yet it's not water that the poppies really need-- they are happy to subsist on rain alone. Extra irrigation merely helps them get bigger and extends their bloom time. What they really need is protection from weed competition.

If not the watering can, what kind of image could symbolize the tending of plants that were actually designed to grow in our environment? If not for our interventions (the importing of livestock, building of houses, roads and lawns), such plants might still be prevalent in our city.

This year, in a couple choice locations on York Boulevard, I sprinkled a wildflower seed mix, hoping for slow waves of color as spring progresses, in true old-California style. Both these locations benefit from some extra watering, the first because of Nanette, who keeps the street beautiful, and in the other location, because of the occasional watering of people I've not met yet.

The only mix at Home Depot was labeled "Southwest Desert Wildflower Mix and was predominantly composed of California natives. I did get a nice sprinkling of yellow tidytips and blue phacelia, even a pink clarkia or two to complement the poppies. But unexpectedly I also got flowers that were not native to California or even to the US.

Unbeknownst to me when I grabbed the packet in the store, the mix included all sorts of other things which the Stover Seed company considers suitable to the climate of the Southwest. Exceedingly prolific in this mix were blue cornflowers and red flax, both European wildflowers. Another Old World favorite, the red poppy, papaver rhoeas, is about to bloom on York!

The mix also includes Dimorphotheca sinuata, an African daisy. I fear African daisies are becoming a California native pretender in my neighborhood. On a hill south of Eagle Rock, which has benefited from native plant restoration efforts, someone has sown African daisies for the last several years. The first year, the bold colors and markings of the flowers left no doubt as to their identity as African flowers. They were colorful in a cheery way, but added a touch of free-way to what I wanted to think of as a "natural" area. This year, climbing up the hill to the same spot, I was surprised to see what appeared to be a whole field of poppies where there had not been poppies before. Upon closer inspection, I discovered only a field of African pretenders in the exact orange hue. A cruel joke!

The combination of colors and forms in this multicultural Southwestern Desert mix don't have the same charm as native wildflowers. Next year I'll drive the ten extra miles to get a wildflower mix from Theodore Payne Foundation, instead of Home Depot.