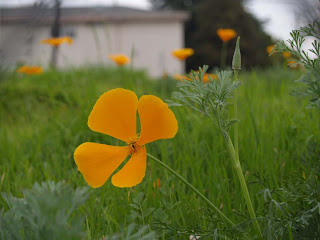 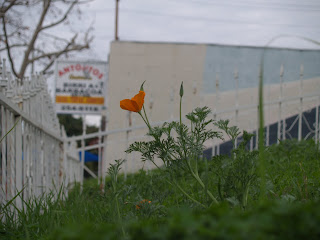 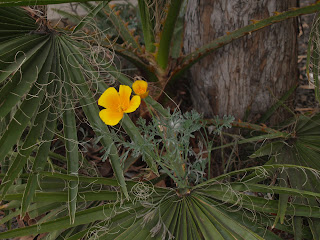 It's summer now. Or fall. I mean middle of winter, but the temperature during the day is hot enough for summer clothes. Perpetual spring, or a harbinger of summer? For about a month, poppies have been blooming as if it were April on two separate lots on the corner of York and Nolden, holding their orange heads up high over neat expanses of closely clipped grass. Who would have thought that California poppies and lawns could be so compatible? Could it be possible that a judiciously timed mowing might have induced bloom for poppies interspersed with lawn grasses? Subject to further research, from the York Boulevard Poppy Lab.
It's been over a year since the first poppies were sown, and I've chosen to tend the poppies only minimally this year, if at all. Let the poppies tell us themselves where they are meant to grow.
Posted by Jane Tsong at 10:49 PM

Love it. Saw a couple early bloomers in November on the corner of York & Avenue 56.

It's amazing where these beauties will grow. Thanks for doing this.

I noticed on the trail at the local Arboretum garden there are rogue blooms even coming up in weird places. When the seeds blow you never know where they will turn up. :)