Everything is still growing 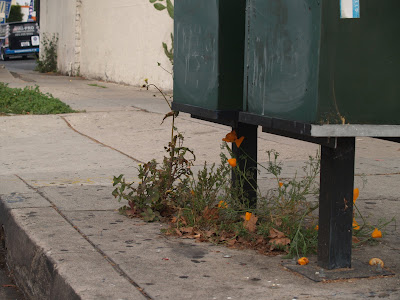 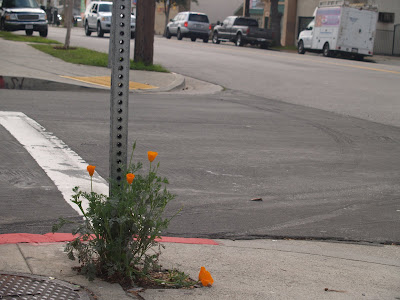 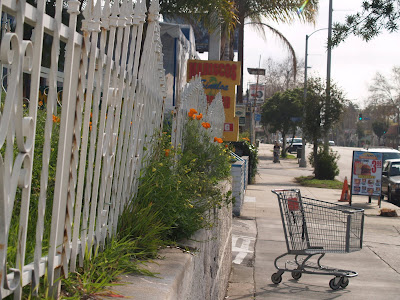 I love rainy season. That’s the growing season in Southern California. Poppies sown three winters ago have been blooming for almost a month it seems, on York Boulevard, and parts of South Pasadena, but not always where you’d expect.

Most of the poppies that remain are in window boxes and areas with high reflected heat (sidewalk cracks) on the north side (South facing side) of the street. In areas where they’ve survived with no input from myself or other gardeners, introduced annuals such as sowthistle and mallow, may eventually squeeze them out. But it’s hard to say. In some areas where they’ve always been outnumbered by fast-growing grasses, they’ve held their ground.

In the regularly maintained planter boxes of the Foursquare Church “The Rock” on York, the gardener has accepted them and now weeds around them.

At York Boulevard Post Office, my favorite location, someone beat me to installing a complete landscape. They came in and took out every piece of the red apple succulent that once covered those planters. They laid down a thick layer of mulch and planted a variety of fun drought tolerant things: lavender, rosemary, pelargonium, perovskia, aloe, and native salvia. This gardener laid down a calling card in the form of a big rock painted with this address: farmerdavesgardens.webs.com.

Dave is regularly maintaining the plot, and is allowing some of the poppies and cornflower that have reseeded last year to remain in the garden. It looks great and I couldn’t help but to smile at all the colors and textures when I went to buy stamps this morning. The stamps I bought said “C-E-L-E-B-R-A-T-E”… I will think of our lovely York Boulevard “community garden” when I use those stamps.

In the slide show above (on the right hand side bar) are a couple pictures of the York Boulevard local government branch "community garden" from 2007. Since 2003, it had been nothing but one rhaphiolepis and red apple succulent. I learned the latter had been originally planted by a postoffice worker just to improve the neglected space. In 2006, I approached the postoffice with a proposal to install a native design by Orchid Black, and other permaculture- inspired furniture. Though we got a positive response, we could not get final official approval. In 2007 some friends helped clear out modest patches of the succulent for an experimental seeding in poppies. Spring 2008 was the peak of the planting which I called “Everything is Still Alive”, and poppies bloomed for blocks in any open dirt space where residents and business owners allowed them to bloom. In 2009, I stopped the input of labor except for sprinkling in a diverse mix of wildflower seed at the postoffice and across the street to add color—all things which would bloom profusely with no input but what the sky offers: Cornflowers, clarkia, tidytips. Later that year, Farmer Dave took out the succulents and rhaphiolepis and is now promoting it as a permaculture design. This is going to be it’s best spring ever!

When I started planting poppies in 2007, just about everyone I talked to on York encouraged me, but also warned me that the flowers would likely be stolen, stepped on, or otherwise vandalized. To the contrary, the calling card stone Dave installed looks as good as on day one. And the vulnerable newly planted shrubs are gaining strength during the rainy season.

I’ve added a cutting of Dave’s zonal pelargonium to the Pelargonium Exchange project. This is a garden for sharing pelargonium cuttings and their stories. It doesn’t have a permanent home in Los Angeles yet, but as Robert likes to quote from the Karate Kid, “Buddha will provide.”

For the Pelargonium Project, see:

Oh! This made my day. Thank you for letting me know about this post and the progress of our seeds.
Here in Asheville the crocuses are blooming and the dafodills are almost ready to pop. The dandelions and comfrey are peeking out of the dead leaves and the robins are back in full force. Hooray for spring!

Jennifer, you are the best! So many inspiring people that I was introduced to through you are now part of my life. I hope your family is doing well....